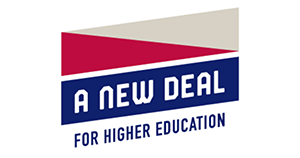 Join the fight for the New Deal for Higher Education and get involved today by sending a letter to your representative demanding that the American Families Plan include the higher education funding that our schools need and our students deserve.

After decades of disinvestment on the state level, our colleges and universities have been hollowed out and the costs have been borne by our students, faculty, and staff alike.

Since the launch of our joint campaign for a New Deal for Higher Education, AFT and AAUP members, activists, and leaders have had thousands of conversations--in meetings, on campuses, and with local, state, and federal legislators about how to make lasting change.
Since the campaign’s launch in February, we have won: This summer Congress began the process of drafting President Biden’s American Families Plan using the reconciliation process to enable passage through the Senate. Senate Majority Leader Schumer recently released a memo that outlines the budget proposals that are envisioned as part of the final (reconciliation) bill, including several important higher education pieces:

The forthcoming Reconciliation package is a down payment on the promise of a New Deal for Higher Education. With the drafting process ongoing it is crucial that we advocate for these important higher education provisions to be included in the final bill.

While there is not yet a final text, we anticipate the “tuition-free community college” portion of the bill to mirror the America’s College Promise Act. Under this model, the federal government enters into a partnership with states to provide tuition-free community college. As part of this partnership, the federal government provides significant funding to help states achieve this goal and in exchange states not only agree to waive tuition for eligible students at community colleges, but also to maintain their state’s higher education investments.

Creating a state-federal partnership framework that includes a state maintenance of effort requirements would be a game-changing win for all public colleges and universities today, and can be scaled up in the future to offer free tuition at more institutions.

We think this is a fantastic first step toward making college affordable for all students. We are asking Congress to extend the promise of two free years of community college to the first two years at a four year degree granting institution.

Tell your Representative/Senator that a strong federal-state partnership is the right way to reverse decades of disinvestment, but that disinvestment is not just limited to community colleges. Congress must increase funding to HBCUs, MSIs, HSIs, TCUs, and ANNHIs, and should also offer subsidies that guarantee free tuition for the first two years of a four-year degree.

The student success grants mentioned in the framework for the final bill are likely a reference to the college completion fund in the American Families Plan. This program would provide grants to both 2-year and 4-year public colleges to plan, implement, and expand evidence-based programs that lead to improved student completion and success. Similar programs have shown that with targeted, upfront investments, the potential for significant increases in student completion exists at all types of institutions.

The proposed College Completion grant program would push higher education policy toward funding what and who we know works to support student success. We need Congress to invest even more in evidence-based practices, and especially those that improve faculty working conditions, such as reasonable class sizes, low student to advisor ratios, and shifting contingent faculty to longer-term and tenure-track appointments.
​
We’re demanding that Congress fight for the inclusion of all of these vital programs and fund them at the highest available level. Join us!
​
In Solidarity,
The New Deal for Higher Education team
https://newdealforhighered.org/ 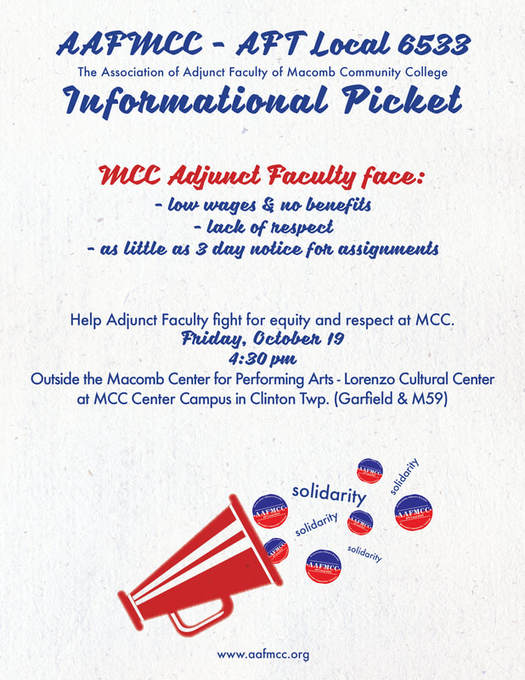 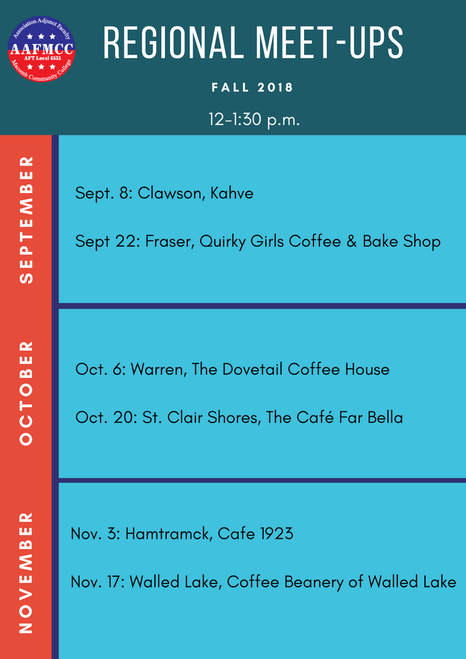 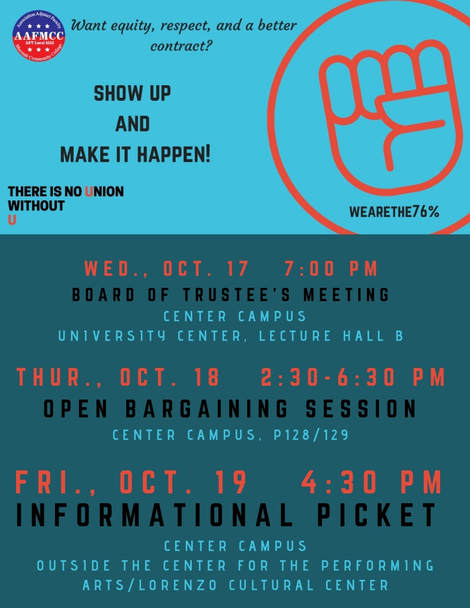 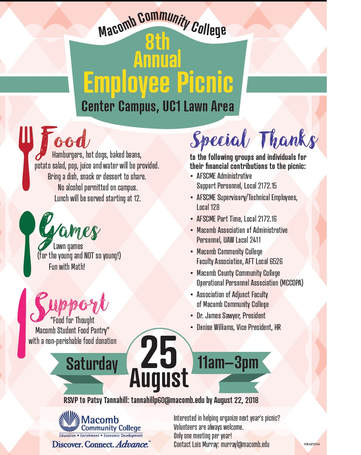 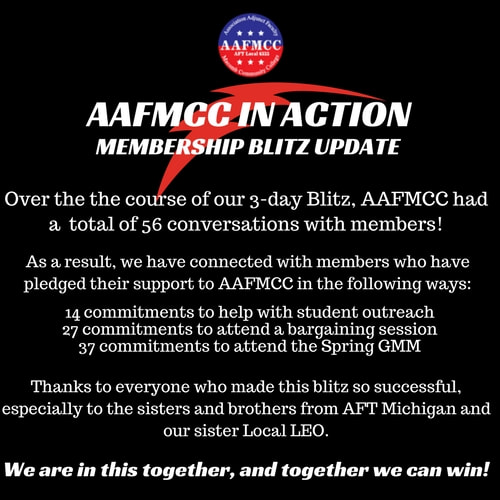 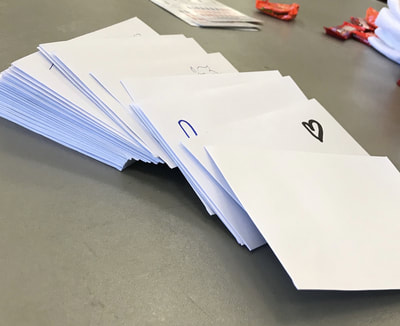 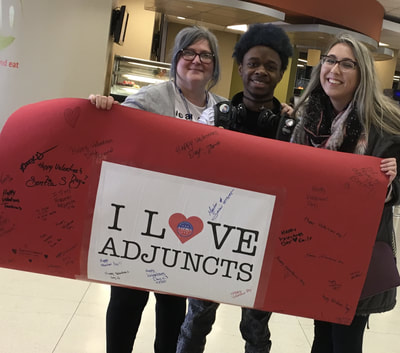 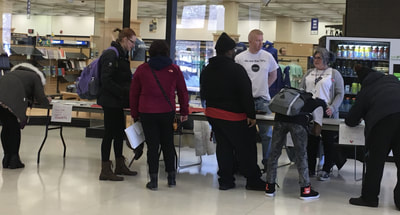 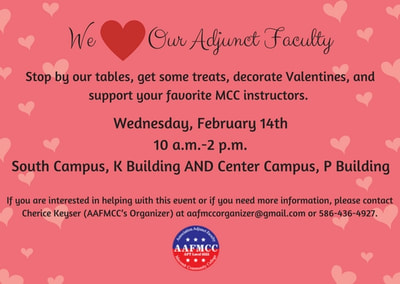 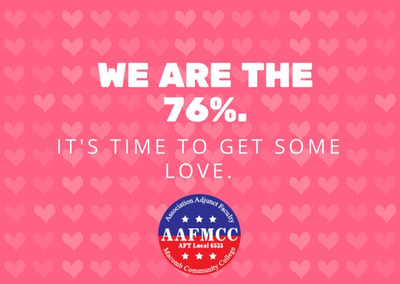 The Association of Adjunct Faculty of Macomb Community College (AAFMCC), AFT Local 6533, stands in solidarity to preserve the integrity of our profession. Like our students, we want to reap the benefits of our hard work and learning. We, too, seek equity, advancement, and financial stability. We reclaim the message that higher education at Macomb is a worthy pursuit for all individuals, including adjuncts. ​​ 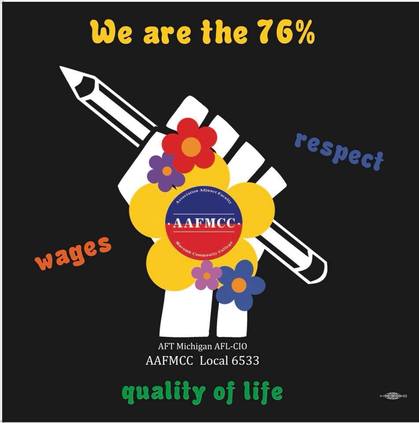